Protégé Biomedical’s Ionic Hemostatic Mineral Technology™, also referred to as IHM Technology™, is a proprietary, specifically processed mixture of all-natural minerals that yields a multi-action process that includes the 1) recruitment of cells (flocculation), 2) immediate initiation of the Factor XII coagulation cascade, 3) vessel constriction and 4) plasma absorption that collectively accelerates the clotting of blood to rapidly stop bleeding from wounds. It works on minor surface wounds and deep cuts or puncture wounds, including those that involve arterial lacerations. ​

​
IHM Technology™ works by acting on both the biochemical (soluble factors) and cellular parts of the hemostasis system. One component activates soluble Factor XII of the intrinsic coagulation pathway. Another component causes an ionic attraction flocculation (clumping together) of the blood cells bringing the platelets into closer than normal proximity. Since an early step in coagulation is the formation of platelet aggregates, which requires platelets to be close to each other, the flocculation of platelets by Protégé Biomedical’s IHM Technology™ means the overall effect is to accelerate the formation of a clot and greatly decrease the clotting time. ​
​
Independent Laboratory Study Summary: ​
A study was performed by an independent laboratory to evaluate the efficacy of Protégé Biomedical’s Ionic Hemostatic Mineral Technology™ versus some of the most commonly used hemostatic products. The effects of Protégé’s components, individually and in combination, on blood clot formation were studied using impedance aggregometry (IA). IA measures clot formation by following the change in impedance of a blood sample over time, after treatment with hemostatic agent. As a clot forms and more mass is added to it by way of recruiting more platelets and red blood cells (RBCs), the impedance of the blood sample increases. The faster the increase in impedance, the more rapid the clot is forming. Also, the higher the final impedance of the sample, the more massive and greater the strength of the clot. 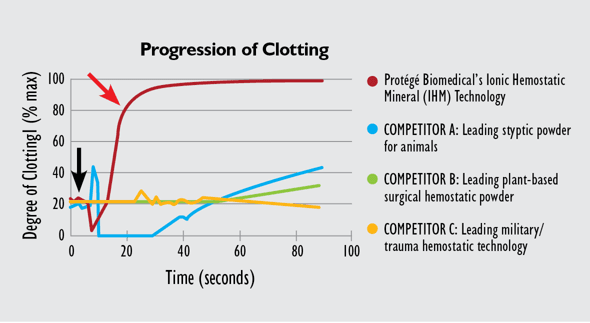 Figure 1 shows the progression of clot formation over time with four different hemostatic formulations. Impedance of a blood sample was followed over time from just before to 90 seconds after adding hemostatic agent. The results are plotted as degree of clotting (vertical axis) vs. time (seconds). The degree of clotting is a percentage of the maximum Protégé value. The black arrow points to the time of addition of the hemostatic agent(s) while the red arrow points to the impedance value at which a solid clot was achieved. The term “solid clot” refers to a clot that could not be shaken out of the impedance cuvette except by vigorous shaking. Such shaking resulted in the removal of the clot as a single large mass.

Figure 1 demonstrates that Protégé Biomedical’s IHM Technology™ begins clotting within a couple of seconds after contacting the blood and forms a solid clot within 15 seconds. Clot mass continues to increase along with the impedance for up to about 90 seconds. The competitors all require a much longer time to initiate a clot (25 to 50 seconds) and do not reach the same degree of clotting as Protégé’s formulation, with competitors A and B reaching degrees of clotting of 40% and 30% respectively, within the time frame of this study. The response of competitor B is unsurprising since it employs a different mechanism of action that does not involve flocculation or strong activation of soluble clotting factors. It is immediately apparent that in our experimental system the dual action of Protégé’s formulation initiates clotting sooner, and more rapidly completes clotting, compared to any of the other hemostatic agents tested. Protégé Biomedical’s IHM Technology™ is able to stop the bleeding where others are slowing. Protégé Biomedical’s Ionic Hemostatic Mineral Technology™ also produced a denser clot than the others. 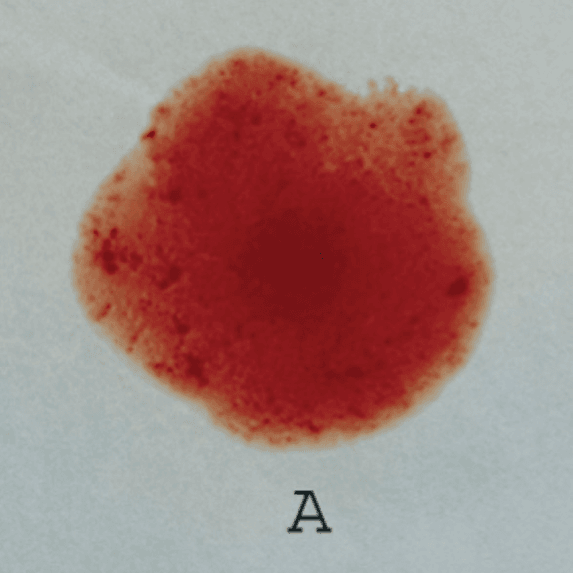 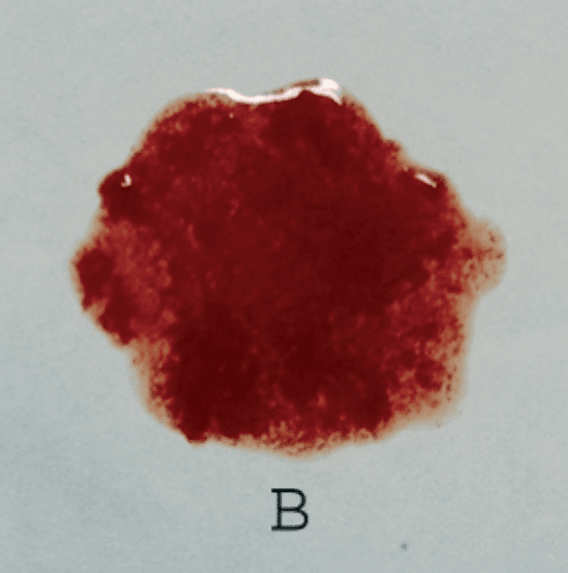 Figure 2: Effect of one of the minerals in Protégé Biomedical’s IHM Technology™ on whole blood is flocculation (clumping) of blood cells (A). Effects of the combination of minerals is first flocculation followed by clotting (B). The initial phase of Protégé Biomedical’s Ionic Hemostatic Mineral Technology™ is flocculation which brings blood cells (platelets, RBCs & WBCs) in close proximity followed by the rapid activation of the intrinsic coagulation pathway. Activation of the intrinsic coagulation pathway results in the formation of thrombin which in turn activates platelets and leads to the generation of fibrin, all of which are involved in the formation of the final clot. The speed of this process directly effects the speed at which a clot is formed. The combination of flocculation and activation results in a very rapid generation of a stable clot.

Summary: ​
Protégé Biomedical’s formulation, mechanism of action, and flexible format gives it characteristics that make it superior to competitive products, specifically:​
1. Speed of clotting – lowers blood loss and decreases total procedural time leading to better outcomes.​
2. Cessation of bleeding – bleeding stops and does not recur, because of the density and strength of the clot.​
3. Effectiveness in liquid – effect not diluted out, works when there is a lot of blood or other fluid at the site.​
4. Film formation – provides a barrier, helping to protect the wound.​
5. The multi-action and efficacy of Protégé Biomedical’s formulation in liquid allows a broader range of applications, allowing the development of multiple product configurations for a larger range of internal and external indications.